Can I Hula Hoop While Pregnant?

If you are an expecting mom wondering if it’s okay for you to hula hoop while you are pregnant, you are not alone.  In the nearly six years I have been doing this, I have met many mothers who hula hooped throughout their pregnancy.  I decided to interview them.  Read on to hear their stories and see their amazing photos.

Disclaimer: This post is for informational purposes only, and you should always check with your doctor before making any changes to your exercise regimen, especially during pregnancy.

Update July 2020: As of last October, I’m now a mom! I have a lot to say about my experience with being pregnant as a hooper, so check back soon for my story 🙂 – Mama Ruby 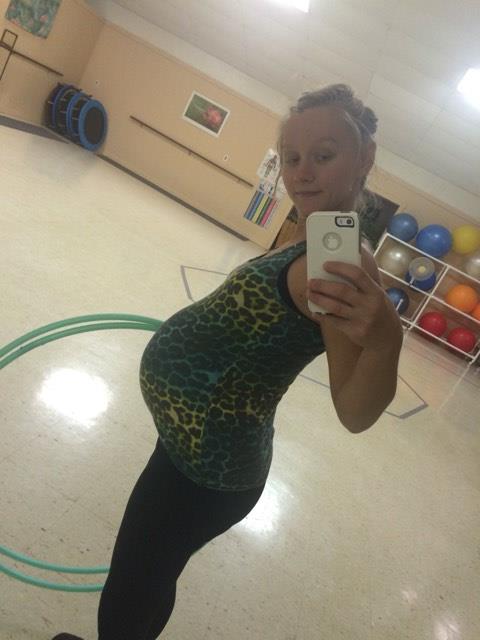 We talked to lots of mothers all over the world about hula hooping while pregnant to get information for this article.  While they each had experiences as individual as the beautiful children they have made, the consensus was clear:

Hula hooping is actually very good for you to do while pregnant!

Your doctor has probably already told you that exercise during pregnancy is good.  So while it’s true that you don’t want to begin a tough new regimen that you weren’t already accustomed to prior to becoming pregnant, hula hooping while pregnant can provide a fun way to get low impact cardio every day, keeping your body limber and abs strong for that fateful day when your precious new baby arrives! 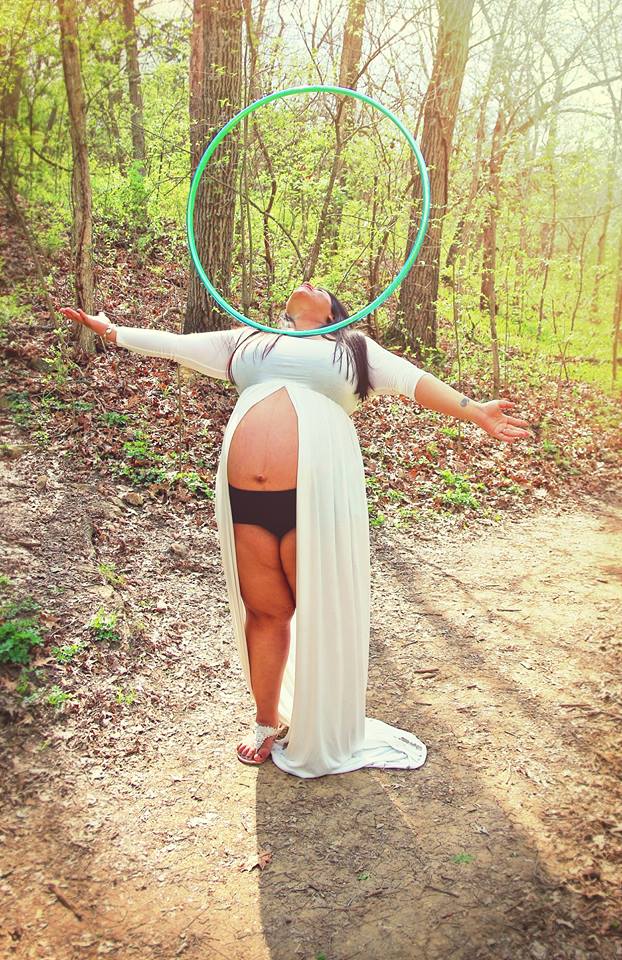 We asked Emily Collins, a hooper and mother from Lottsburg, Virginia to share her personal experience of hula hooping during her pregnancy.  She said that because she was already a hooper prior to becoming pregnant, she did have to get used to her body changing and how that affected her ability to move within the hoop.

Overall, she said that hooping helped her stay active throughout her entire pregnancy except for the final six weeks when she was on bed rest, and she was back inside her hula hoop again within two weeks after giving birth!

She also mentioned that hula hooping helped her a great deal with post-partum depression, which we all know is a very serious matter that a large percentage of new moms have to deal with.

We’re so happy that hula hooping helped Emily during such a transitional and difficult period in her life!

Next we talked to Kayla Sprowls, from Oak Creek, Colorado, a hooping mom of three! Here’s what she had to say about hula hooping while pregnant in her own words:

I had to go back to my beginner hoop for on body hooping almost immediately. I could not keep my light polypro hoops up for the life of me [due to the changes in body shape]….I hooped my entire pregnancy and it kept me so fit. The weight I gained came off within a week of her being born, and I had a c-section! I was able to hike a mountain the day after I got out of the hospital (that was against the doctor’s wishes, but I didn’t feel pushed too far by it) whereas with my other pregnancies, I was down for a while.

I also hooped up until the moment I went to the hospital to have her…After she was born, I wasn’t allowed to hoop for like a month, so I kept it really simple [and just did basic isolations using only arms]…stuff that I didn’t feel in my abdomen. But as soon as I got the OK for waist hooping, it felt like I’d never even had surgery!” 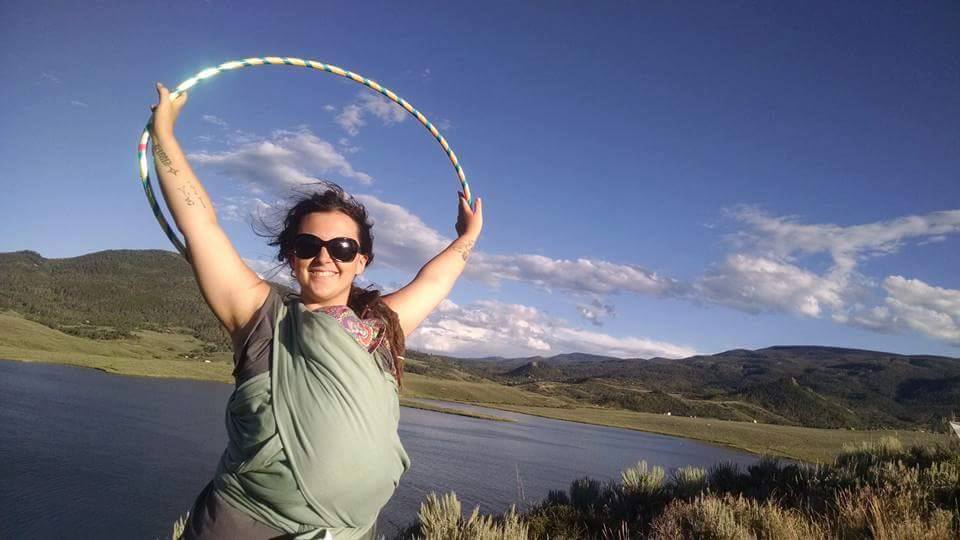 A triumphant Kayla Sprowls carrying her new baby and her hula hoop!

Don’t forget to bust out your LED hula hoops at night for a meditative and comforting experience during your pregnancy and after giving birth! Babies love them, by the way 🙂

We had many of the hoopers we interviewed talk extensively about how much of a comfort it was to spin bright colorful LED hula hoops during a time when their bodies and minds are being tested daily like never before.  We love this picture that Richelle Piepenbrok sent us!  You can just feel the calmness and serenity! 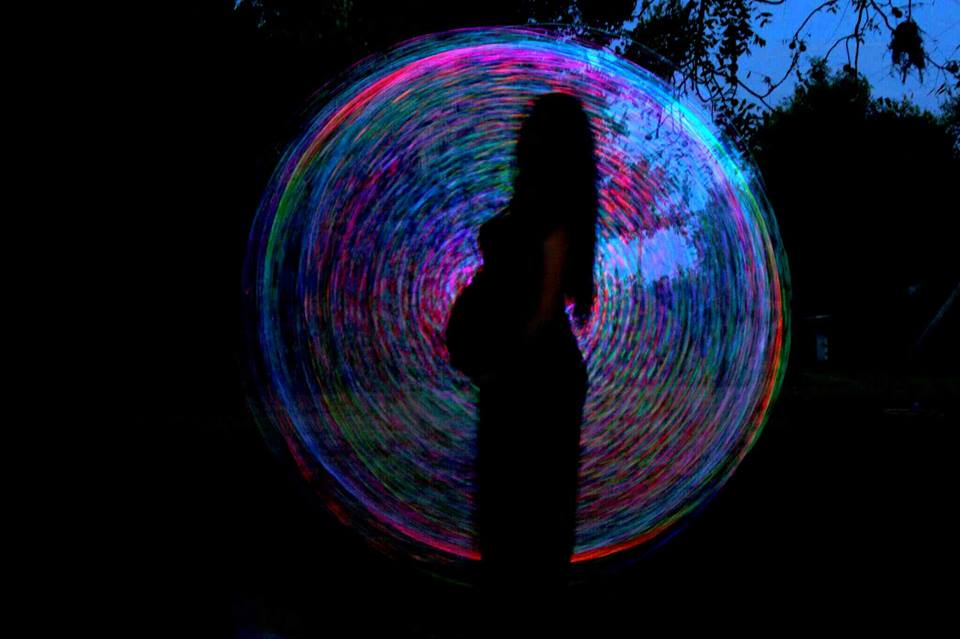 So what are the main lessons we have learned about hula hooping while pregnant?

Ready to begin your journey? Enroll today in my Six Week Beginner Hula Hoop Challenge for All Bodies!

We really hope this article inspired you to spin that hula hoop throughout your entire pregnancy and after!  We know that the hoop lifestyle will help you raise wonderful children that will continue to make the world a more peaceful place. 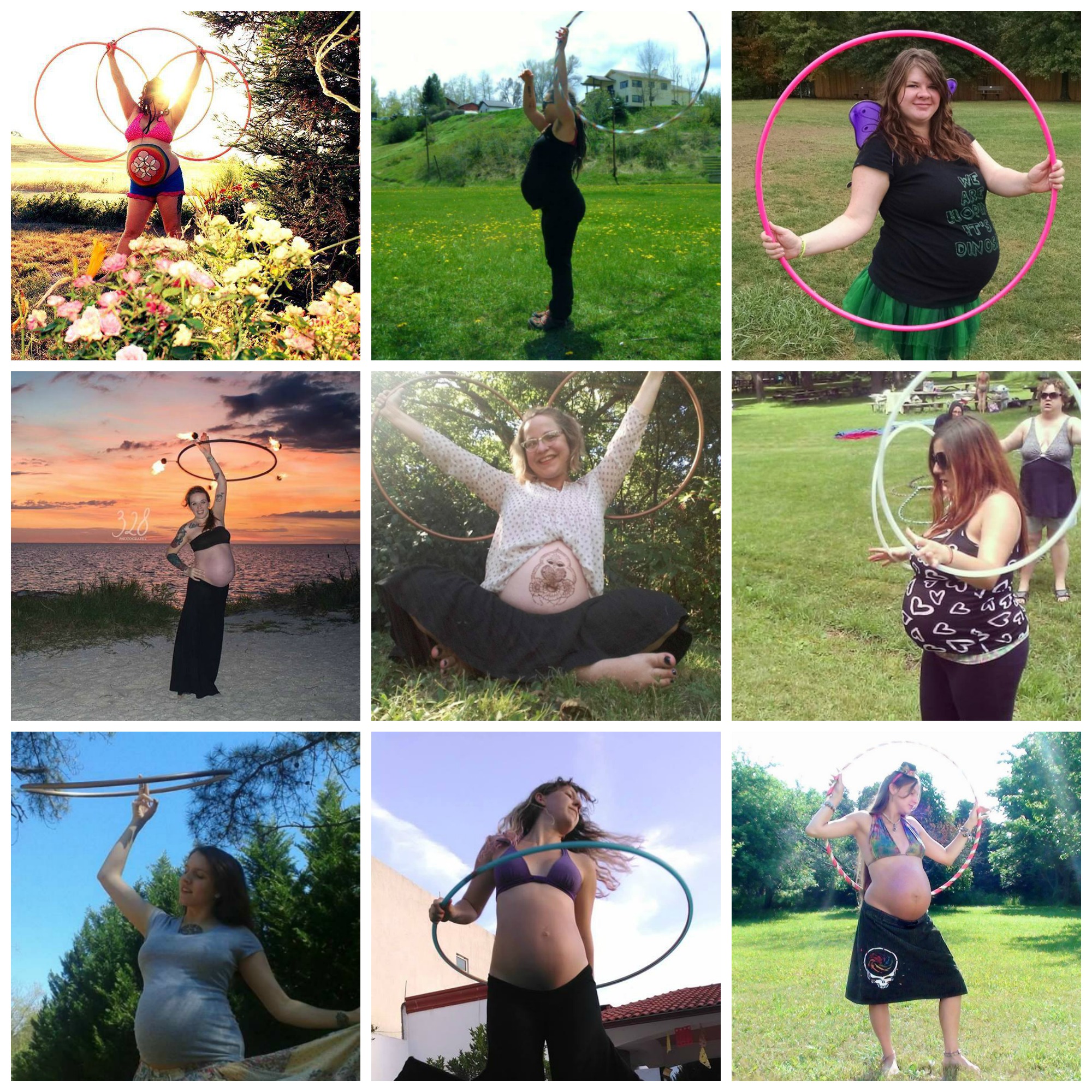 The Best Hula Hoops for Plus Size People

Can I Hula Hoop After Giving Birth?

Can I Hula Hoop After Giving Birth?

Is 2kg/5pounds hula hoop too heavy to use during pregnancy? I’ve been hopping regularly for years.

I would not use a 5 pound hoop around your waist during pregnancy. I would stay around 1.5 pounds such as the hoops we make here: https://rubyhooping.com/product/weighted-exercise-hula-hoop/

hello how much is a dance hoop? I’m pregnant and hoop a lot before. But I need a dance hoop to keep up the workouts.

Can you use wavy padded hula hoop when pregnant?

I wouldn’t recommend the wavy ones when pregnant, but you should ask your doctor to be sure.